Cryptocurrencies are often thought of as the new kids on the investment scene, little understood and perhaps more volatile than traditional options like stocks and commodities. Many people are still unfamiliar with the ins and outs of crypto assets, and deciding on a particular cryptocurrency to invest in can be confusing for a newcomer to the market.

A popular way of entering the crypto market is to start small, with one or two minor investments to test the waters. After all, there is a long list of cryptocurrencies to choose from, so it can be tricky to know where to start. By including a couple of cryptocurrencies in your wider investment portfolio, you’ll be spreading the risk of any investments while potentially benefiting from an exciting new opportunity.

But how well do cryptocurrencies perform? We’ve all heard of the massive ups and downs that many cryptocurrencies, such as Bitcoin and Dogecoin, have experienced at one time or another, but do these fluctuations reflect cryptocurrencies as a whole? And just how profitable can crypto investments be?

To establish just how lucrative and viable crypto is as an investment option, Traders of Crypto, the crypto community platform, compared ten of the best performing cryptocurrencies with some of the most popular stocks and shares. It looked at the change in value over the last year and discovered how much a $100 investment would be worth in June 2021, had you invested in June 2020.

The Top Investments After One Year

Looking at the change in cost for each stock and cryptocurrency over a single year, we can see which options have increased in value the most. The table below shows the increase in value of $100 invested in June 2020 v June 2021

Of the thirty options Traders of Crypto analysed, Dogecoin was by far the best choice for single-year investments, with $100 invested in June 2020 being worth $12,749.28 in June 2021. This staggering increase in value makes the cryptocurrency that was originally based on a meme a much more serious opportunity for crypto investors.

Binance Coin is a digital currency issued by the Binance Exchange, and can be used to pay for a range of activities from transaction fees to travel bookings, entertainment, and other online and financial services.

Ethereum is the third highest performing investment option in our study over a one year timeframe, with a $100 investment in June 2020 being worth $1,172.81 just twelve months later. This cryptocurrency has gathered a large following and has a very high level of adoption, making it a promising choice for longer-term investors as well.

Of the top ten performing assets in the comparison, eight were cryptocurrencies. This shows the booming potential of this new asset class compared to traditional investment classes which while relatively stable, tend to offer much lower potential returns.

While not the best performing cryptocurrency, Bitcoin has still experienced incredible growth, and is way ahead of any competing cryptocurrency in terms of market capitalisation. It remains a hugely popular investment for crypto enthusiasts and the number of companies that accept it as payment for goods or services continues to grow, making it the most well-established and integrated cryptocurrencies thus far.

Elon Musk’s Tesla is the top-performing stock from June 2020 to June 2021, with the value of its shares increasing by 265.85% over that time period. That makes Tesla one of only two companies to outperform the top cryptocurrencies in our list, with the other company being vaccine producer Moderna, which has seen its value soar during the pandemic.

Yet, Elon Musk is also a firm believer in the future of cryptocurrency, and is known to have invested heavily in Bitcoin, Ethereum and Dogecoin. However, of these three cryptocurrencies, Elon Musk’s name has become almost irrevocably tied with Dogecoin, which he has been keen to show his support for both through investments and public praise.

The hype that Mr Musk has caused around Dogecoin is said to have played a part in its ballooning value, which has in turn has increased the profile of cryptocurrencies and spread awareness to a wider more mainstream audience. 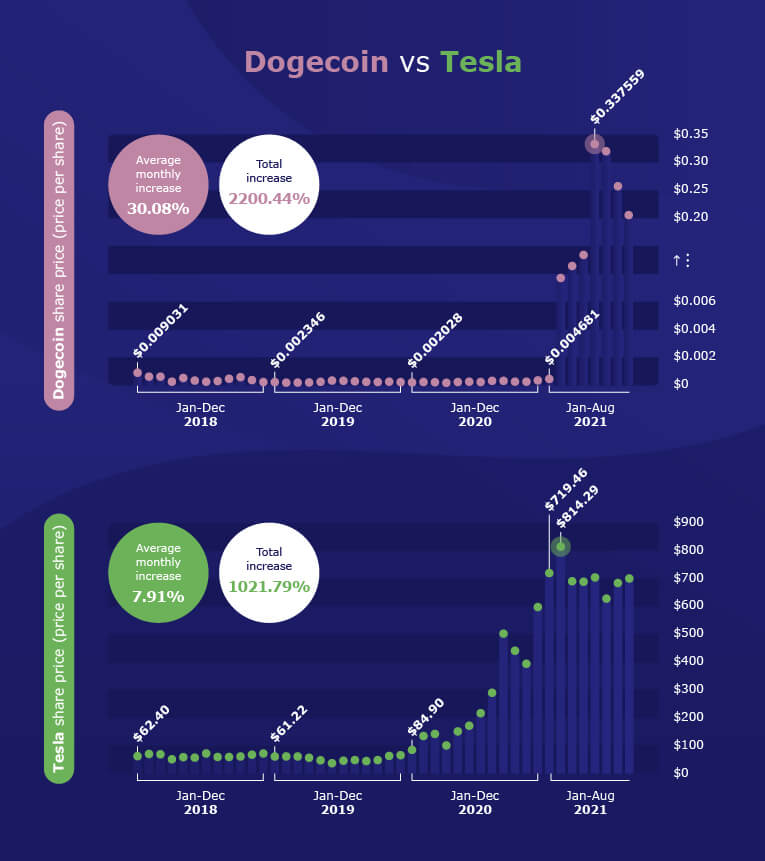 Tesla’s share price has soared since the beginning of 2018 by 1021.79% to $700 per share, where it was worth just $62.40 three and a half years ago. However, despite this colossal growth, Dogecoin clearly outperforms Tesla with a price increase of 2200.44%, more than double that of Tesla. Either way you look at it, both investments have performed outstandingly.

Traders of Crypto wanted to compare the dollar value of these two investments to find out just how much Elon Musk’s supposed Dogecoin fortune is worth when stacked up against his Tesla assets. They found:

Antony Portno, founder of Traders of Crypto, commented on the findings:

“The main takeaway of this is that while certain big names and celebrities in the crypto world might appear to be influential and great subjects to mimic investment-wise, they are able to take substantially greater risks than the average person due to their other assets and wealth. Remember that while these assets have risen greatly in value, they are still able to fall in price, especially cryptocurrencies, so consider your investments carefully and try not to let hype rule your wallet.”

Traders of Crypto wanted to create an investment index in which it looked at some of the biggest cryptocurrencies and stocks, assessing their value over time. To do this, it first found a list of the best cryptocurrencies of 2020, although it removed Tether due to its being tied to the Dollar, and replaced it with Dogecoin due to its huge increase in value earlier in 2021.

Once it had ten cryptocurrencies selected, it then found a list of the best stocks of 2020 published by The Street. Traders of Crypto chose the top 10 to use as its comparison, and proceeded to use Yahoo Finance to find the value of each asset, stock and crypto, at the beginning of June 2020 and June 2021. This allowed it to compare the price increase and value of a $100 investment over 1 year, revealing the best-performing assets of the last 12 months.

Traders of Crypto then turned its attention to the best performing stock and cryptocurrency, both of which are strongly linked to one individual, Elon Musk. The community driven platform decided to investigate the value of each of these assets, Tesla and Dogecoin, in more depth, looking at their monthly prices as far back as January 2018. This allowed Traders of Crypto to compare the performance of not only the top performing investment opportunities in their respective classes, but also the savviness of Mr Musk’s own investments. It then supplemented this research with a comparison of the value of Elon Musk’s Tesla and Dogecoin assets, revealing which is worth more, and by how much.